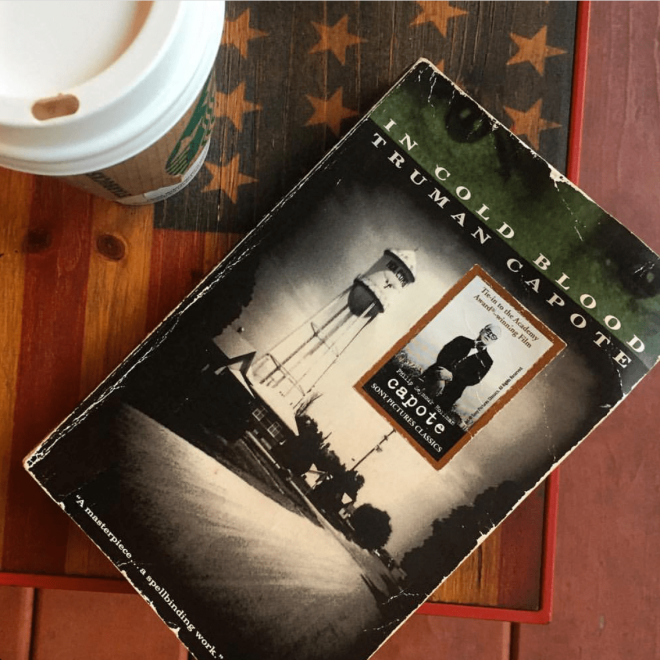 from my bookshelf: in cold blood by truman capote

in cold blood is a true crime novel by truman capote, about the murder of the clutter family in holcomb, kansas on november 15, 1959. the case lacks an evident motive or useful clues. capote writes from a surprising perspective, focusing on the lives of the killers. this angle allows the reader to establish the missing pieces of the case based on where the murderers came from, how they grew up, and what they experienced leading up to november 1959. capote takes a special interest in killer perry smith, describing his dynamic personality and intellectual nature. smith’s interesting character does not overcome the senseless killings of the clutter family. capote captures all of these competing themes in a timeless non-fiction account.

“The village of Holcomb stands on the high wheat plains of western Kansas, a lonesome area that other Kansans call ‘out there.'”

“…Perry, getting out of the car, went inside the station, where he locked himself in the men’s room. His legs pained him, as they often did; they hurt as though his old accident had happened five minutes before. He shook three aspirins out of a bottle, chewed them slowly (for he liked the taste), and then drank water from the basin tap.”

“Just remember: If one bird carried every grain of sand, grain by grain, across the ocean, by the time he got them all on the other side, that would only be the beginning of eternity.”

“The four coffins, which quite filled the small, flower-crowded parlor, were to be sealed at the funeral services–very understandably, for despite the care taken with the appearance of the victims, the effect achieved was disquieting. Nancy wore her dress of cherry-red velvet, her brother a bright plaid shirt; the parens were more sedately attired, Mr. Clutter in navy-blue flannel, his wife in navy-blue crepe; and–and it was this, especially, that lent the scene an awful aura–the head of each was completely encased in cotton, a swollen cocoon twice the size of an ordinary blown-up balloon, and the cotton, because it had been sprayed with a glossy substance, twinkled like Christmas-tree snow.”

[from the notebook of perry smith] “If called upon to make a speech: ‘I can’t remember what I was going to say for the life of me–I don’t think that ever before in my life so many people have been so directly responsible for my being so very, very glad. It’s a wonderful moment and a rare one and I’m certainly indebted. Thank you!'”

“Envy was constantly with him; the Enemy was anyone who was someone he wanted to be or who had anything he wanted to have.”

This site uses Akismet to reduce spam. Learn how your comment data is processed.