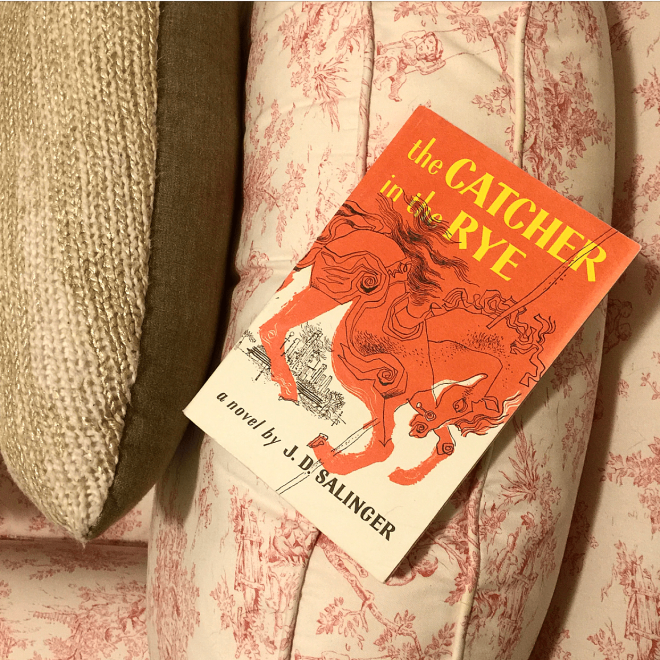 from my bookshelf: the catcher in the rye by j.d. salinger

holden caulfield, an angsty teenager from new york city, spends his time in a southern california institution reflecting on the previous year. holden’s story starts with his expulsion from pencey prep school. holden resents “phonies.” his memories before pencey include a variety of things: talks  at a cab driver about ducks’ migration patterns, dances with strangers in a hotel lounge, the time he solicited a prostitute and failed to get what he wanted from her (genuine connection with another human in the form of satisfying conversation), visits with old friends, his tender relationship with his sister phoebe, and his deep appreciation for visits at the museum of natural history. holden has glimpses of happiness throughout the course of his battle with depression and feeling of being misunderstood, like when he sees phoebe enjoying a ride on a carousel, and notably, when he hears a young boy singing: “if a body catch a body coming through the rye.” holden’s feelings transcend teen anxiety and capture a relatable, honest frustration with the superficial. i also sense holden has a desperate, sincere hope that given the chance, the characters in his life can be better than how they seem.

“I ignored him. I really did. I went right on smoking like a madman. All I did was sort of turn over on my side and watched him cut his damn toenails. What a school. You were always watching somebody cut their damn toenails or squeeze their pimples or something.”

“The whole lobby was empty. It smelled like fifty million dead cigars. It really did. I wasn’t sleepy or anything, but I was feeling sort of lousy. Depressed and all. I almost wished I was dead. Then, all of a sudden, I got in this big mess.”

“The goddam movies. They can ruin you. I’m not kidding.”

“She was having a helluva time tightening her skate. She didn’t have any gloves on or anything and her hands were all red and cold. I gave her a hand with it. Boy, I hadn’t had a skate key in my hand for years. It didn’t feel funny, though. You could put a skate key in my hand fifty years from now, in pitch dark, and I’d still know what it is. She thanked me and all when I had it tightened for her. She was a very nice, polite little kid. God, I love it when a kid’s nice and polite when you tighten their skate for them or something. Most kids are. They really are. I asked her if she’d care to have a hot chocolate or something with me, but she said no, thank you. She said she had to meet her friend. Kids always have to meet their friend. That kills me.”

“I bored him a lot. I really did. He amused me, though. He was one of those guys that sort of amuse me a lot.”

“I’m not too sure old Phoebe knew what the hell I was talking about. I mean she’s only a little child and all. But she was listening, at least. If somebody at least listens, it’s not too bad.”

“Boy, it began to rain like a bastard. In buckets, I swear to God. All the parents and mothers and everybody went over and stood right under the roof of the carrousel, so they wouldn’t get soaked to the skin or anything, but I stuck around on the bench for quite a while. I got pretty soaking wet, especially my neck and my pants. My hunting hat really gave me quite a lot of protection, in a way, but I got soaked anyway. I didn’t care, though. I felt so damn happy all of a sudden, the way old Phoebe kept going around and around. I was damn near bawling, I felt so damn happy, if you want to know the truth. I don’t know why. It was just that she looked so damn nice, the way she kept going around and around, in her blue coat and all. God, I wish you could’ve been there.”

This site uses Akismet to reduce spam. Learn how your comment data is processed.